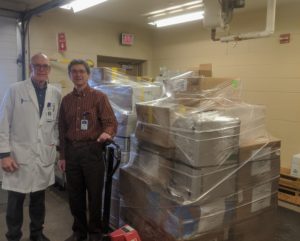 Although Project Haiti has been forced to cancel several medical trips due to these safety concerns, we remain in close touch with our colleagues. They have been through a time when they were more concerned about personal and family safety than learning. Despite the dangers, we have heard stories about the sacrifices they have made for their patients They are now anxious to resume training and provide broader medical care to their patients. Accordingly, we are scheduling several workshops for later this spring. Assured that it would arrive safely, we have just shipped over 1,000 lbs of supplies and equipment for urology and laparoscopic surgery. These items are critically needed as the economical situation is even worse than usual in Haiti.
Thank you to all of our supporters who make this work possible. We hear so much frustration by our colleagues due the obstacles they have faced over and above their usual difficulties.
Posted in 2020 and tagged David Weigel, Dr. Henri Lanctin, Global Association for Support of Haitian Urology, laparoscopic surgeries, Port-au-Prince, Prairie Lakes Healthcare System, project haiti.