Dr Pierre-Alix Nazon, beloved husband and father, died on Tuesday, January 17, 2017, at the age of 56. Born on August 11, 1960, Dr. Nazon had an illustrious career in private and academic urology in Haiti, devoting his life to providing the best urologic care that Haiti can offer. While he was an extremely progressive and talented urologist, his greatest love was for his family, his children, his friends, his colleagues and the Haitian people. He has left a deep void in the heart of his beloved wife Regine, his sons Jean Paul and Samuel, his daughters Kara and Lara – both young physicians, his mother Maud, his brother Claude and his two sisters Marie-Helene and Marie Maude.

He was an avid soccer player and was known for his athleticism. Despite being a calm and mild mannered person, always with a gentle smile on his face, he was a karate teacher. He instructed soccer and karate to his peers, friends, and colleagues.

He attended medical school in Haiti at the Universite D’Etat D’Haiti, and went on to complete his residency training in urology at the same institution. Son of a renowned urologist and pioneer in Haitian Urology, Dr Claude Nazon, he followed the footsteps of his father and sought further training abroad. Pierre-Alix was accepted for a fellowship in lower urinary tract endoscopy at the Urology Department of the University Hospital in Lyon, France under the direction of Professor Paul Perrin in 1989-90. To further his training he spent 3 months in Israel mastering upper urinary tract endoscopy and lithotripsy (1995).

When he returned to Haiti, he was actively involved in residency training and the development of a stone management program in Haiti. He attracted a busy clinical practice in Port-au-Prince and surgically treated numerous patients with minimal resources. He had great vision for the future of Haitian Urology. From the onset, he was most receptive to collaborative efforts between international and Haitian urologists. This past May 2016, he traveled to San Diego (USA) to attend the America Urologic Association (AUA) meeting to represent Haiti at the Global Philanthropic Committee meeting. Along with some international urologists he conceived of the required strategies to improve Urologic care in Haiti.

He has been welcoming to changes and educational opportunities in order to improve urologic care in Haiti. He has authored numerous articles in Haitian medical journals and has given several conferences. He has pioneered minimally invasive kidney stone management in Haiti. He was one of the first urologists to introduce transurethral resection of the prostate (TURP), ureteroscopy and extracorporeal shock wave lithotripsy in Haiti. He was a leader in the Societe Haitienne D’Urologie (SHU) and the newly created Global Association for the Support of Haitian Urology (GASHU), which he helped name. He was instrumental in drafting the memorandum of understanding that currently governs the SHU and the University Hospital Saint Francois de Salles.
Dr. Nazon was an extraordinary teacher and mentor, having trained countless interns, students and residents in clinical Urology. He was profoundly devoted to helping develop the state of the art management of stone disease in Haiti.

Pierre Alix’s death leaves a great void for his family, his colleagues, and within Haitian Urology. His family will remember his limitless love and the sacrifices he made to provide them with the highest quality of life and the best education possible. His friends will remember him as an avid accordion player and a devoted soccer player. His soccer teammates will remember him for his love of the soccer field where he exhaled his last breaths at the tender age of 56. 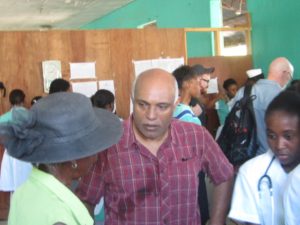